If you are looking to race in Bermuda this year go to the LINK section of this site to the Bermuda Triathlon Association’s website or go to :

The season gets underway on 25th March with the Good Friday Home Event over approximately sprint distances at a venue to be determined.

The Aon National Sprint Championships are scheduled for the 8th May.

Check out an interview with Flora at

After fallling sick, Tyler Butterfield was unable to start today at the Pan American Ironman 70.3 2016 Championships in Panama City, Panama.

The race was won by Canadian Lionel Sanders who posted the fastest bike and second fastest run to win comfortably from France’s Antony Costes and Australia’s Tim Reed.

Canada’s Jeff Symonds, who is coached by Jasper Blake, who will be coaching his 6th Bermuda camp in February, posted the fastest swim and run splits but dropped time on the leaders on the bike ; he finished 4th.

Tyler Butterfield gets his 2016 season underway this Sunday 31st January in Panama as he competes in the Pan American Ironman 70.3 Championships.

The 1.2-mile swim course will take place in the Pacific Ocean within the banks of the Panama Canal, and the new two-loop bike course leads athletes from the Amador Causeway en route to the new Avenida de los Poetas, passing by the Casco Viejo (Old City) over a magnificent new section of the Cinta Costera (Coastal Strip) over the Panama Bay heading towards Costa del Este via the Corredor Sur turning around at Costa del Sur. The two-loop run course utilizes the Amador Causeway, a major tourism area surrounded by the Pacific Ocean.

Tyler will have his work cut out on Sunday as a strong pro field has entered.

Assuming they are at the start line ( they are signed up) Tyler’s toughest competition will likely come from :

Tim Reed (Aus) 4 Ironman 70.3 wins in 2015 including the Ironman 70.3 Asia Pacific Championships. The speedo wearing Aussie is one of the fastest runners in the sport.

Ritchie Cunningham (Aus) based in Boulder Colorado. Veteran Aussie with a number of top 5 finishes in 2015 including a win at Ironman 70.3 Pucon, Chile.

Igor Amorelli ( Brazil) – 4th at Ironman Brazil 2015 ( one place ahead of Tyler) and winner of the Los Cabos Ironman in 2014. Was 4th two weeks ago a Ironman 70.3 Pucon, Chile after fading badly on the run when leading after the bike.

If you plan to race abroad in 2016 or know of others who have signed up for races please let us know so we can keep everyone updated with all of the news and results. This request especially applies to any of you travelling in groups to races incase others might want to join your group. Just EMail me on dm@uptonmanagement.com or post a comment to this blog by hitting the comment section above. 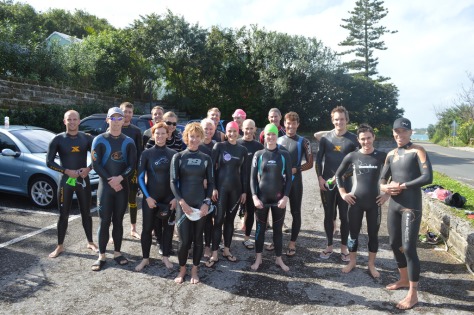 PARTICIPANTS AT THE 2014 CAMP, SOME WITH LOANER WETSUITS

We are still in desperate need of loaner static bike trainers AND WETSUITS for the 2016 Neill / Blake Triathlon Camp.

Static trainers are needed for a session on the evening of 25th February and wetsuits for sessions on 20th and 26th February.

PLEASE help out if you can by loaning a bike trainer or wetsuit by contacting Alec Shepherd at alecshep@btopenworld.com

There is still time to sign up for the 2016 Neill / Blake Triathlon Camp which will run from the 19th to 28th February. The camp, which is run by leading Canadian triathlon coaches, and former professional triathletes, Jasper Blake and Mike Neill is in its sixth year and has won rave reviews every year from participants.

Last year 49 triathletes, from complete beginners to experienced triathletes, benefited from the camp which culminates in a great informal dinner, which this year will be hosted by Frances and Jonnie Betts. The camp sessions are held over the weekends and in the evenings with a couple of lunchtime sessions. Advanced participants will also ride one early morning.

Although the camp is divided into Beginner and Advanced sessions, participants come together for some sessions with each person able to work at their own pace. In addition, participants can ” mix and match” sessions so, for example, a strong cyclist but weak swimmer in the Beginner group can do the intro to triathlon session and can then opt to do some of the Advanced group bike sessions.

If you are an experienced triathlete, try and encourage beginners to sign up. The Beginners camp only requires you to be able to swim a couple of lengths of a pool, any stroke, have any bike with gears in working order (and a helmet) and a pair of running shoes. It is NOT just for super fit people looking to get into triathlon. In previous years we have had beginners as young as 16 and some participants in their 60’s.

Details, including the camp schedule and an entry form, can be found at http://www.bta.bm

Thanks to Flora Duffy, the BTA has a Javier Gomez autographed cycling outfit up for auction.

For details on how to bid for the outfit, contact Charlie Duffy at EMail : duffy@northrock.bm

The winner will be announced at the Neill / Blake Triathlon Camp 2016 wrap up dinner on Saturday 27th February 2016. All proceeds from the auction will go to the Bermuda Triathlon Association.

A number of participants in the Neill / Blake Triathlon Camp will need to borrow static bike trainers for a session on the evening of 25th February.

Some participants will also need to borrow wetsuits for the open water swims on 20th and 26th February.

If you can lend a static trainer or wetsuit please contact Alec Shepherd on alecshep@btopenworld.com

We want to determine numbers for the camp so please sign up this week if possible. Go to http://www.bta.bm for more information and an entry form.