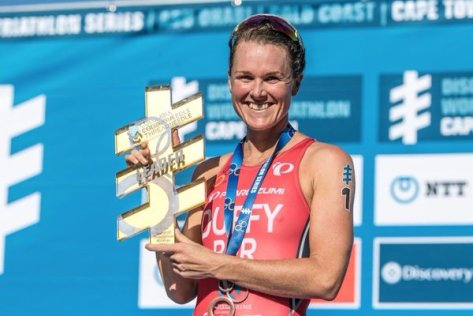 Flora Duffy will be looking to maintain her #1 World Ranking in the International Triathlon Union’s Triathlon World Series as she competes this weekend in the next leg of the series in Stockholm Sweden.

Here is the ITU write up on the womens field which with the Olympics just weeks away is a strong field.

The World Triathlon Series continues this weekend at the 2016 Vettenfall World Triathlon Stockholm with a stacked women’s start list. Top ranked Flora Duffy and Jodie Stimpson lead the contingency that will race on the infamous cobblestone streets of the Swedish capital over a two-lap swim, eight-lap bike and four-lap run course this Saturday.

For the second WTS race in a row, Bermuda’s Flora Duffy will wear the golden number 1 for the race. As the current Columbia Threadneedle Rankings leader, she is having a career-best WTS season. After just missing the podium with fourth-place finishes in Abu Dhabi and Gold Coast, she has biked her way to a bronze in Cape Town and then a silver in Leeds. She is only missing a gold medal this season, so this Saturday could be her day to finally reach the top of the podium especially considering her success on tough bike courses.

However, one woman who does have experience being at the top of the Stockholm podium is USA’s Sarah True. She returns as the reigning back-to-back champion after she claimed the WTS Stockholm titles in 2014 and 2015. If she can manage another huge performance this weekend, she will earn a three-peat win.

American compatriot Katie Zaferes will join True on the start line this weekend. Zaferes, like True, will compete in Rio this summer after a remarkable six podiums last season, one of which was silver in Stockholm. While she hasn’t featured on the podium yet this year, this could be the venue that gets her back on the medal stand.

However, the American duo will face off with the full Great Britain Olympic roster with Helen Jenkins, Vicky Holland and Non Stanford all making appearances in Stockholm. Jenkins started off her season by earning third place in the season opener in Abu Dhabi, and continued on to win in Gold Coast. Holland is fresh off a podium performance in Leeds, while Stanford has one win under her belt this season from Cape Town.

The medals haven’t stopped there for the British women this year. Jodie Stimpson opened up the WTS season by winning in Abu Dhabi. She also earned the silver medal in Cape Town, and just missed the podium in Leeds to sit second overall Columbia Threadneedle rankings. Her results mean she has a good chance of being named World Champion in Cozumel later this year if she pulls out another strong performance this Saturday in Stockholm.

Andrea Hewitt (NZL), always a force to be reckoned with, kicked off her season with a roar in Gold Coast where she raced to bronze. Stronger in the back half of the season, Hewitt has scored bronze and silver in Stockholm the last two years. Although a consistent feature to the WTS podium, Hewitt hasn’t won a WTS race since 2011, but that could all change on Saturday.

Japan’s Ai Ueda also lines up as a medal contender having wowed her home nation by claiming the bronze medal in Yokohama in May.

After  a difficult journey to Stockholm Flora is raring to go in this her final race before the Olympics in Rio de Janeiro, Brazil.

Flora’s race gets underway tomorrow, Saturday 2nd July, at 11AM Bermuda time and for more information on the race and to watch the video feed live ( subscription required) go to http://www.triathlon.org