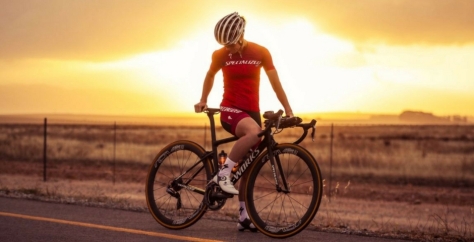 Flora Duffy will take to the start line tomorrow in Abu Dhabi as she starts the defence of her world title. Flora takes on an all star field in what will be an early indicator of her form ahead of the next WTS event – in Bermuda.

For the fourth consecutive year, Abu Dhabi will find itself the focus of world triathlon attentions as it kicks off the ITU World Triathlon Series season on March 2. To the delight of triathlon fans around the globe, nine of the top ten women in triathlon will line-up in the amazing Yas Marina circuit in one of the most competitive races in ITU history.

The world-class field is set to tackle a 750m swim, 20km bike and 5km run on Friday, March 2, to kick off the 2018 season. A season that will feature stops in Bermuda, Yokohama, Leeds, Hamburg, Edmonton and Montreal before wrapping up in September with the Grand Final in the Gold Coast. Not to mention a season that will mark the start of the road to Tokyo 2020 Olympics, with the qualifying period starting in May 2018.

Wearing the golden number one in WTS Abu Dhabi will be double World Champion Flora Duffy (BER). After a stunning 2017 season that saw her on top of the WTS podium in six out of nine races, the Bermudian superstar is looking forward to making her debut on the iconic Yas Island course.

“I was disappointed to miss the Abu Dhabi race last year due to an injury,” said Duffy. “I’ve heard a ton of great things about Yas Island course so I can’t wait to tackle it – especially the bike course which looks like it’s really suited to my aggressive style of racing,” said Duffy, who has made a name for herself as one of the strongest cyclists in the field.

She will be among some very strong contenders in Abu Dhabi, though, starting with the winner at this same circuit in 2017, Kiwi Andrea Hewitt, whose furious and emotional sprint at the finish line was one of the most memorable moments of last season, followed by another win for the Kiwi in WTS Gold Coast.

“I’m delighted to be returning to Abu Dhabi this year, a place that holds some amazing memories for me following my first-place finish last year. The 2017 race was a turning point for me both personally and professionally. To pick up the gold medal, the way I did, it was an overwhelming sense of emotion. That victory would not have been possible, had it not been for the fantastic support I received from family, friends and the triathlon community. I’m looking forward to seeing what this year’s race holds and with a bit of luck, I’ll be on the podium again!”, said the kiwi.

Last year’s World Championship runner-up, Aussie Ashleigh Gentle, will also start 2018 in Abu Dhabi, the perfect scenario for her to get ready not only for the season, but also for the Commonwealth Games, set to start in the Gold Coast in April. With a proven record of being one of the strongest runners in the field, she will surely find herself among the leading pack when it comes to the final kilometres of running.

Carrying the USA flag will be compatriots and World Numbers three and four Katie Zaferes and Kirsten Kasper. “I had a really good season last year and I am intent on maintaining that momentum,” said Zaferes, who earned medals in three WTS races in 2017 and finishing in the top 10 in all but one race.

“I am very fond of the Abu Dhabi race and have flown in to compete since 2015. The start list is very exciting and I can’t wait to get back to the Yas Island course this year,” said Zaferes who is intent on a podium finish.

That won’t be an easy goal, with some other really strong women in the field. The Brits will be led by Vicky Holland, bronze medallist at Rio 2016, and who just came back from injury to win the first World Cup of the season, in Cape Town. She will team-up with Non Stanford, Jessica Learmonth and Sophie Coldwell, some of the strongest swimmers competing in Abu Dhabi.

Also among the ones to watch will be Dutch Rachel Klamer, 8th in the overall ranking last season and, along with Canadian Joanna Brown, one of the rising stars of 2018. On the side of the more experienced athletes, the Japanese squad, led by Ai Ueda, along with Juri Ide and Yuko Takahashi, will be also vying for the podium spots.

The Women’s elite athletes will take the stage in WTS Abu Dhabi on Friday, March 2, at 13.22 local time. Follow all the action on triathlonlive.tv and on twitter @triathlonlive. Join the conversation with the hashtags #WTSAbuDhabi.

HERE IN BERMUDA. HUGELY POPULAR.FOR ALL ABILITIES INCLUDING BEGINNERS. SIGN UP AND SCHEDULE TO FOLLOWFebruary 22, 2020